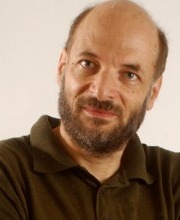 Moshe Negbi (August 8, 1949 - January 27, 2018) was a lawyer, journalist, lecturer in the fields of law and communication, legal commentator and presenter of the "Din Udvarim" radio program. Negbi was an Associate Professor in the Department of Communication and Journalism at the Hebrew University of Jerusalem. As a legal commentator he dealt mainly with current affairs. There is much to be done about protecting human rights, freedom of the press, law enforcement and democracy, and issues of the purity of public figures.

During his studies in 1969, he was accepted as a news editor for Israel Voice, and worked at the Broadcasting Authority until it closed in 2017. In 1981, he began to edit and submit to Israel the Law and Things program, which deals with legal and human rights issues. Subsequently, the program was broadcast to Kan - the public broadcasting corporation.

In 1997, he was a research fellow at the Shornstein Center for Communications and Public Policy, Harvard University in the United States.

For eight years he wrote a column entitled "Law and Order" in the Maariv newspaper. In April 2001, the newspaper was dismissed for refusing to write a critical commentary on the prosecution's move regarding the acquittal of Avigdor Kahalani, who was an adjunct to the Nimrodi affair, as his editors' request. His dismissal sparked a public outcry, prompting sharp statements from journalists and public figures against his dismissal. Against this backdrop, Negbi was warned by the Press Council Ethics Tribunal for commenting on a plea bargain in Nimrodi's case on television, which was in conflict, due to his dismissal by Ofer Nimrodi.

Negbi served as the legal commentator for Israel's Voice and the First Channel until they closed, and wrote opinion articles in the Globes and Haaretz newspapers. In 1996, he was appointed senior lecturer in the Department of Communication and Journalism at the Hebrew University of Jerusalem, and at the end of 2013 he was previously appointed associate professor. Taught in Political Science and Communication Studies at Tel Aviv University and in the Media and Journalism Unit at Bar-Ilan University.

From 1999 to 2000 he taught at the Sapir College of Communication School.

From 2001 to 2007 he taught at the Netanya Academic College of Communication. He lectured at the Israel Police Command and Staff College, the National Security College, and the IDF Senior Officers College.

He previously served on the board of the Civil Rights Association.

Moshe Negbi was married to Dr. Irit Negbi, a lecturer in the Institute of Criminology at the Hebrew University of Jerusalem and in the Department of Criminology at Ashkelon College, and they have three children.

Negevi passed away on January 27, 2018 after a battle with cancer.