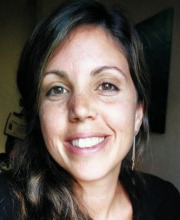 Her MA dissertation examines representations of Holocaust trauma in contemporary European cinema, by exploring views of the post-Holocaust period (1945-1965) in three prominent European films of the 2010s (Hungary, Poland and Austria).

My current research focuses on the concept of Sisterhood (women's fraternity), theoretical feminist perceptions, and political power systems related to conflict resolution, as represented in Israeli and Palestinian cinema for the past 40 years.

My methodological work focuses on analyzing cinematic representations of sisterhood from 40 different films in an interpretive approach, According to specific themes.

Sisterhood cinematic representations will be examined as a complex feminist-political view that strives for gender equality but is also abundant with tensions due to the inherent disparity in asymmetrical conflict, between the gender and class aspects and the ethnic one, but also from an option to cross those boundaries and to establish a cross-border relationship between women.

Specifically, I am interested in the way cinema, television and other kinds of visual cultural, deal with the topic of homosocial female relationship and how these representations shape the way Israeli and Palestinian women see themselves and each other.