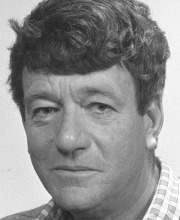 Yitzhak Roeh (June 6, 1937-July 22, 2017) was a radio and television man who promoted an informal news presentation. Among other things, he initiated, edited and submitted Reshet Bet's Noon magazine "on the half of the day" (BaHatzi HaYom) and initiated and edited the "almost midnight" news program on Israeli television.

In 1974, he traveled to the United States to study communications at Columbia University. When he returned, he submitted several programs on Israeli television. In 1979, he was appointed "almost midnight" news presenter.

Roeh retired from the Broadcasting Authority for the benefit of the academy and began to study communications at the Hebrew University. In 1982, he completed his Ph.D. In his academic work, he researched the news language and its complex affinity for the reality it seeks to describe. He also investigated the differences between the different types of press.

His book "Another on Communication" was published in 1993, published by "Reches".

In 2004 he retired from the academy. In 2008, a collection of articles entitled "Coverage as Storytelling: Looking at the Media Discourse in Israel" was published in his honor, edited by Moti Niiger, Menachem Blondheim and Tamar Liebes, published by Magnes and Smart Institute, The Hebrew University.

How would Itzhak Roeh have conveyed news of his death in 2017? Those who have experienced his intellectual integrity, his honed irony and special melody, can guess that after natural hesitation and nonchalant gesture, he would doubt the newsworthy nature of this event, as it was his second death - the end of matter - after his first death a decade ago that was the end of spirit - thathas always severed its connection to the world. It is likely that as a professional who avoids placing unnecessary burdens on his interlocutors, listeners, viewers and students, he would not dramatically refer to either event.

Son of workers from Kiryat Haim, a member of the working youth movement and a well loyal Nahlai He went to "fulfillment" and became a shepherd at Kibbutz Alumot near the Sea of ​​Galilee. Like many of his friends and like Shlomik, the first novella hero on Israeli television, he came to the city haunted with feelings of betrayal of the ideals of human salvation and society. But thanks to the charisma of modesty and to ego that has always played on a minor scale, the shepherd has received his own grazing flock that has been captivated by his lifelong charm - fans, critics and lovers ever since emerging into radio, television, academy and street mornings. No man and woman, including myself, hesitated to come out of the closet and admit our weakness; we just loved and loved him.

In this context, I will always remember with pleasure and longing the exchange of roles between us on the paths of the wider world. He, everywhere feeling as if he was in the pasture in front of the Sea of ​​Galilee, including stubborn loyalty to the sandals even on a rainy New York summer day and a stubborn refusal to wear a jacket at official events abroad, served as a guide to me in Paris (starting with the convention district where his wife Miriam's parents lived , To Montmartre and Marais), and in New York (in the Chelsmore building, where many Israelis have lived over the years and in the Village institutions: Café Vivaldi, Elephant and Castle Restaurant, Fringe Theaters and high-quality theaters). I did my best to repay him in Montreal, on the sidewalks of Notre Dame de Grace (NDG) and in the Quebec-French area of ​​the city.

As has been said and written a lot, he was a critical and innovative professional, rightly called a "media revolutionary." First, because of the warm and humane style of submission that few have successfully imitated and which has become acceptable over time, though without the special grace of a shepherd. Second, because of the serving technique. Roeh seems to have been the first to dare to pronounce a soft and mundane "R throat" broadcast, deviating from the usual media arrogance and bringing the radio listeners and television viewers closer. Although this way of steering is the fruit of Ashkenazic Zionist hegemony, it has succeeded in softening the original formality and authority of the voice of Israel, which made the station a sort of BBC for the poor. Third, because of his part in the subversive group of young people who grew up in the voice of Israel under the auspices of Haggai Pinsker, who changed the nature of the news on the radio and later took the leadership in it. They were not perfect and did not always follow the rules, but without them the radio would not have been renewed. Like others in this group, Roeh was not a loved one of the media rulers. A fascinating example is his public reference to the "Nakdi Document," the first ethical code for broadcasting in Israel by Nakdimon Rogel in 1972. The document was amended five times and had no dramatic effect. Following the 1996 amendment, Roeh wrote, on the basis of research he conducted, that it was an anachronistic and irrelevant text.

This is the appropriate background to discuss his academic activities, which also excelled in doubting accepted approaches in media research. Roeh is endowed with brilliant creativity. He did not write or publish much in the academy, so much so that there were those who blamed him lazily and did not reward him for being an intellectual pioneer, a cultural researcher from the practice whose innovations and insights brought a fresh spirit to media work and research. But those who knew him know that this was probably due to uncompromising self-judgment, genuine modesty and criticism of institutional rituals, which included academic qualities according to the amount of publications (in English, as he emphasized himself, as a juror of Hebrew). But what he studied and what he wrote was always refreshing, tantalizing and thought provoking.

His approach was fundamentally skeptical and grounded in his professional experience. He was among the first in Israel to publish and preach that "it is all media stories." This approach has sparked professional, public and academic curiosity that has not waned over the years. By joining the visitors the acceptance / convention? The traditional assumptions / assumptions of absolute truth that its media expression is objective coverage. Instead, it fostered the study, creation and research of approaches that focus on "relativism" and are anchored in political and cultural criticism of structures and functions. This approach put Shepherd in line with innovative critical thinkers and scholars around the world.

Roeh's work has also been close to reformist approaches in other fields. For example, his vigilance for the importance of philosophical approaches and anthropological roadmaps. In the first area is Jean Baudrillard, who criticized the left-wing criticism of the media in the capillist world and pointed out the disadvantages of the Gulf War coverage in the Western media in the allegorical argument that the Gulf War was not held at all but on newspaper and radio and television pages. These arguments found a clear echo of Roeh's use of criticism of war coverage and hostilities.

His approach has also been linked with debates between anthropologists about the need for being there in ethnographic research, to Dayan and Elihu Katz's discussion of the media's non-attendance experience as and when media events occurred. In this context, one wonders: How important was Roeh to the "remote presence" of digital media and social networks today?

The importance of professional background as an academic resource and research has been reflected in Roeh's work on at least two occasions. One was his participation as a consultant in establishing the Department of Communication at Sapir College. The innovative idea for Roeh and his partners at the time was to focus and inform many that the department was engaged in teaching and developing creative and production, unlike other programs that tried to resemble universities, perhaps hoping to buy the heart of the Council for Higher Education.

Another notable event was the novelty of combining follow-up research with prestigious production, such as that of "Almost Midnight," the night news edition that was born, edited and directed by Roeh. The study was conducted with colleagues Elihu Katz and Akiva Cohen and student Barbie Zalitzer, now a well-known researcher. During his time as head of the television set-up team, Katz (who was the head of the Department of Communication at the Hebrew University), introduced the research dimension to the professional work in broadcasting. This ambition matched that of Roeh, incorporating a professional dimension in communication studies. The "almost midnight" study was a rare and innovative combination of television work and communication research, in which Roeh managed to bring professional media to the academy perhaps more than Katz managed to bring to the media academy.

Roeh was a prominent qualitative researcher and collaborated with many media researchers such as Refael Nir, Elihu Katz, Menahem Blondheim and others. But unlike the academic districts, he also found a common language with quintessential quantitative scholars, such as Akiva Cohen. And loyal to him, he also maintained close contact with humanities and behavioral colleagues, such as his teacher Gershon Shaked and his friends Dan Laor, Elazar Weinrib, David Chen and David Bargal. He also has a lot to share with students in his research and publications and inspire their independent work. Some achieved great achievements and some remained loyal to him for good.

In summary, Itzhak Roeh gave some basic problems and contributed greatly to social science thought and research in general and in the media field in particular. It would not be an exaggeration to say that his main contribution was in defining the identity and directions of communication as a profession (not exactly defined) and, like many of its academics, as a conceptual or research discipline and sub-discipline still seeking identity and raison d'etre.