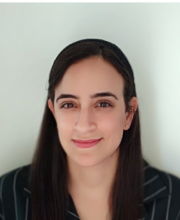 Dr. Chen Sabag Ben-Porat is a post-doctoral fellow at the Smart Institute at the Hebrew University of Jerusalem. Her research interests focus on political communication and include the study of the political public sphere, political discourse, comparative communication and media accountability.

Her master's thesis on social network site usage patterns of politicians won the Trivaks Research Excellence Award. In her doctoral research she examined social network usage patterns of parliamentary assistants, functioning as stand-ins for legislators in Israel, Germany & the US. It also studied public attitudes to this stand-in communication mode in Israel. (“Parliamentary Assistants as Stand-Ins for their Legislator: Social Network Usage Patterns in a Comparative Perspective: Israel, Germany, and the US," 2019, Bar Ilan University excellence program, advised by Prof. Sam Lehman-Wilzig).

In her work she established a model by which one can examine the level of engagement of parliamentarians in their social media networks (as opposed to the level of engagement of their aides) in relation to the electoral system used in the country, as well as to many other internal and external variables. The work helps chart the process of current political information flow and points to failures in political discourse and connection between parliamentarians and the public, via social media.

Her current research deals with media accountability in political contexts. It is supervised by Prof. Menahem Blondheim and Dr. Hananel Rosenberg.