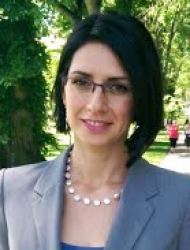 Carolin Aronis is a Ph.D. candidate in the final stages of attaining her doctorate from the Department of Communication at the Hebrew University of Jerusalem. Her doctoral dissertation deals with the subject of "intimacy and media," and investigates how traditional mass media such as radio, television, and the newspaper paradoxically cultivate intimate relationships between audiences and media figures. Exploring the media’s fundamental processes of personalization, privatization, and proximation, Carolin shows how the media’s impersonal, public, and distant nature can paradoxically invite the development of intimacy and closeness between the two sides of the mass medium. In her dissertation, she specifically studied the call-in radio show program, reality TV, and the journalistic genre of letters written to the dead. Nowadays she works on articles and research related to her dissertation.

Carolin earned her master's degree from the Department of Communication at the Hebrew University, studying maternal discourse and the representation of motherhood in the media. Over the years she has also investigated the balconies of Tel Aviv as special spaces for communication and identity throughout the city’s 100-year history. Additionally, she has analyzed practices of witnessing among the children of Holocaust survivors.

Carolin’s research interests lie in the establishment of communication between distant others through mediated and/or public conditions. She is also interested in communication theories, discourse, gender, space, urban culture, witnessing, and the creation of memory.

Carolin currently lives in Fort Collins, Colorado, and between 2011 and 2013 she visited the Communication Department at the University of Colorado in Boulder. She served as a lecturer and teaching assistant for undergraduate and graduate communication students in Israel from 2004 to 2010, at the Hebrew University, the College of Management, and Sapir College. For three years she worked as the bachelor’s degree counselor for the Department of Communication at the Hebrew University, and from 2009 to 2010 she led a discussion and writing group for Ph.D. students called “Establishing Identity and Social Relations.” She is one of the founders and administrators of the Israeli Social Science Ph.D. Mailing List, which was founded in 2008 and includes more than 500 participants from various fields and universities. In the past, Carolin worked as a journalist and writer.